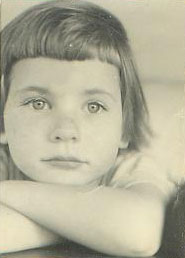 I grew up in Chester County outside Philadelphia at a time when there were fields with cows, woods with streams, and barns with hay to play in. My father built rooms onto our house and my mother painted and gardened. My sister and I spent a lot of time outside exploring and inside making up stories for our dolls and stuffed animals. And I read, read, read as much as I could!

When I was twelve, my parents took us to Europe for a year. My father, who was a school teacher, and my mother taught us while we wandered from Scandinavia to Sicily. I missed seventh grade–hooray! Instead of putting on my first stockings and thinking about boys, I read books and played with dolls. I also discovered the world was a bigger and far more interesting place than I had known before. We saw how people had lived in Pompeii, we saw gypsy caravans, and villagers cooking dinner outside their front doors. Ever since then, I’ve been curious about people in other parts of the world. 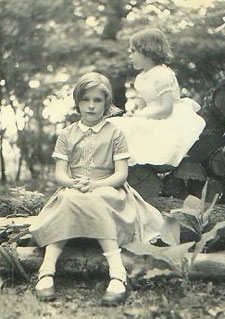 I went to the Shipley School in Bryn Mawr, Pennsylvania. In eighth grade I had a young English teacher who liked the stories I wrote and encouraged me. After high school, I spent four years at Vassar College, graduating in 1973 with a major in Drama. Okay, I knew I wasn’t going to be a famous actor, but the theater is great for learning about characters and dialogue.

Over the years, I’ve worked as a bookseller, antique jewelry appraiser, and costumed guide in Philadelphia. After I was married and had two wonderful boys, I worked for ten years as a preschool teacher in Wayne, Pennsylvania. It was the last job I ever thought I’d do, but I loved every minute of it. Being around children, my own and at preschool, gave me ideas for my first books.

I wrote four picture books on nonfiction topics. Bedtime! was a history of beds and the places people have slept down through the years; Hairdo: What We Do and Did to Our Hair was a history of hairstyles; How Sweet It Is (and Was): The History of Candy; and last but certainly not least, Underwear: What We Wear Under There. 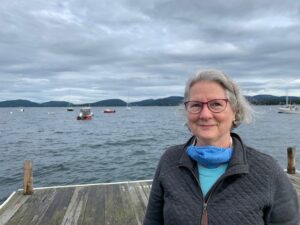 Now I am so happy to be living in Maine.  When I first moved to Portland, I taught English language learners at an elementary school in South Portland.  I worked with students from every continent except Australia and Antarctica!  My amazing students inspired my first middle-grade novel, One Good Thing About America (Holiday House, 2017). Next came, How to Save a Superhero (Holiday House, 2021), inspired by my uncle and my visits to see my parents at their retirement home. It was so much fun to write!

When I’m not in Portland, I spend time on Great Cranberry Island, a small island off the coast of Maine.

And, yes, I am working on an idea for a new novel!