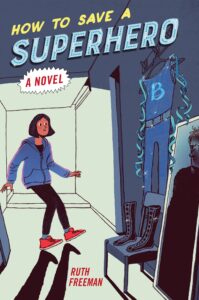 Today, October 19, is the day when my new middle grade novel, How to Save a Superhero, begins to make its way out into the world.

It’s the story of Addie, a girl who hangs out at a retirement home after school waiting for her mother to get off work. The newest resident, a grumpy and difficult old guy, seems to have some unusual abilities. Could he be a real…no, a REAL superhero?

Addie, together with her friends and the other residents, band together to try to save him from a bunch of scientists trying to kidnap him.

This “leads to trouble, wild escapades, and a thrilling climax. Featuring a cast whose distinct personalities are clearly built out, Freeman’s imaginative, suspenseful, and well-paced novel of intergenerational friendship will keep readers guessing.”  ***Starred review from Publishers Weekly!

“…a last-second rescue that will definitely have dazzled readers sorry to leave Addie’s suddenly not-quite-so-ordinary world. Behind an uncommonly savvy, redoubtable protagonist, Freeman stocks her cast with a diverse array of equally vivacious characters, including as lively and hilarious a group of resident seniors as ever was.”